Unusual Biotransformation of a Pyrrolotriazine Heterocycle

Biotransformations can be diverse and not limited to simple oxidation or dealkylation. An oncologic agent, The BMS-690514, is an example of unexpected metabolism. This compound undergoes multiple biotransformations, among them are P450 mediated oxidations of its heterocycle pyrrolotriazine group. Two major metabolites A and B are resulting from + O biotransformation.  However if the metabolite A shows a hydroxylation of the heterocycle, the metabolite B seems to undergone a unusual rearrangement. The isolation of that metabolite demonstrated the formation a hydroxypyridotriazine group. 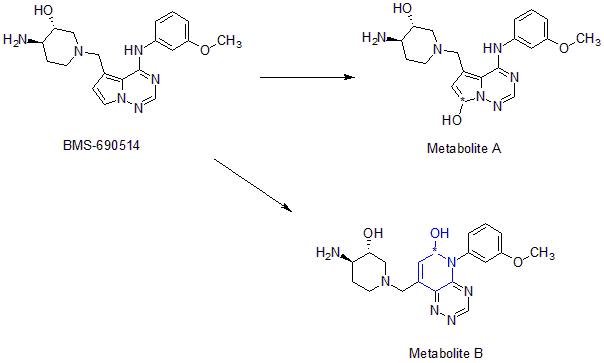 Hepatochem offers a variety of photochemistry reactors and accessories that are used throughout the world to explore chemical conditions. All of our reactors are compatible with most vial formats and stirring plates. We also offer several photochemistry screening kits for calibration and accuracy.

Interested in learning more about our products?
Complete our request form and we'll get back to you as soon as possible.

Through our revolutionary technology, HepatoChem enables cost effective testable quantities of metabolites in-house even at the earliest stages of drug discovery. This new capability, which enables affordable early metabolite toxicity testing, offers drug companies the opportunity to save millions each year through dramatically improved drug pipelines.