Do You Know How They Make That Color For Your LED Light Source?

How They Make That Color For Your LED

Everyone reading this probably knows what metals, ligands and other reagents are in the reaction that is currently stirring under their hood.  And as chemists, we can often be annoyingly particular about everything that goes into our flasks.  We can obsess over the purity of our solvents, the supplier for specific reagents or the color of our favorite catalyst. For this audience, hopefully everyone is also now accustomed to think about the wavelength and intensity of the light they are shining on their flask (Photons are a reagent).  But recently, in a moment of quiet introspection we posed ourselves these questions, “Do we know what metals are used in the chips in each particular LED?” “Do we know how they work?” and “Really?” The answers were no, yes, and ok, no.  Which prompted us to try to put all our thoughts on these topics in one place.

Now, maybe some of you remember everything about these topics.  If so, congratulations on recently passing your graduate school qualifying exams.  For everyone else, here is an in-depth overview on the ways scientists and manufacturers make the color of your LED light sources (and how LEDs work).

The many ways to make light (or “How LEDs won the photoredox wars!”)

It is pretty illuminating (yep, we went there) when looking at the first examples of the visible-light catalysis “renaissance” and subsequent work, that the choice of light sources reported would generously be described as “diverse”.  Mercury lamps, incandescent bulbs, CFL, white LED bulbs, blue LED strips, pool lights, flood lamps, grow lights, amphibian lights, sunlight, flashlights, blacklights, lava lamps and Lite Brites™ all found themselves cited in some of the world’s most prestigious chemical journals.  (less of these examples are fake than you might think). 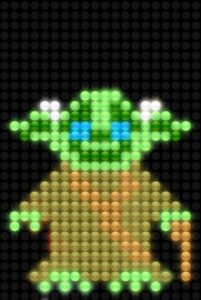 Lite Brites in Photochemistry there is!

So, it is not an overstatement to say that adoption of high-powered LEDs with specific narrow wavelength bands across the visible spectrum changed the game for photochemistry (specifically visible light photochemistry).  But how did we get here? And how do they make all the colors for your LED light sources?

The concept of an LED (light emitting diode) has been around for a while.  The first LED was built in 1927 but practical uses were not achieved for decades.   Light emitting diodes (LED’s) operate using the principle of electroluminescence, first discovered a few decades earlier by the English physicist H.J. Round in 1907.   Electroluminescent materials emit light upon the passage of an electric current (more on this in a bit).  This is contrasted by incandescent lights like your standard household lightbulb, that emit light when the filament inside is heated.   Incandescent lights (most commonly tungsten filaments) convert less than 5% of the energy they use into visible light.  The rest is lost to heat.  Tungsten light sources emit a relatively continuous spectra of light from around 300 nm to 1400 nm.  Tungsten-halogen lamps (bulb with trace amounts of iodine or bromine gas with a tungsten filament) are a more efficient and brighter version of an incandescent bulb but generate significantly more heat (good for grow lights, potentially not ideal for lighting a room on a hot summer day).

Fluorescence drove the basis behind the first alternatives to incandescent bulbs.  Compact fluorescence lamps (CFLs) operate by applying an electric current to mercury gas vapor in a sealed tube (or alternatively neon, argon or xenon gas), which causes excited mercury atoms to fluoresce producing short-wave UV light.  The UV light causes a phosphor coating on the inside of the lamp to glow white.  CFL’s use less energy than incandescent bulbs and produce more light.   A standard CFL produces about 60 lumen per watt compared to about 16 lumen per watt for a tungsten lamp.  However, CFLs are more expensive (before electricity cost considerations) and considered hazardous waste in most areas.  Rather than continuous radiation, CFLs emit light in specific regions of the visible spectra (can be referred to as line spectra).  While most CFLs appear white to the human eye, one can envision many applications where this difference between tungsten lamps would have negative or positive implications.

Visible light can be released through quite a few other processes as well.  Theoretically, you could make a light source from a chemiluminescence reaction (the world’s largest glow stick) or light your house with mutant bioluminescent plants and mushrooms but the commercial viability here might be a few years off (Figure 1).  Personally, our favorite might be sonoluminescence (light released upon sound) which is absolutely something that we knew existed before reading up on it (to be honest, who cares about LEDs lets learn more about this?) 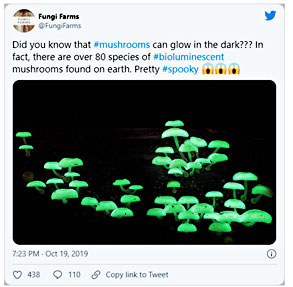 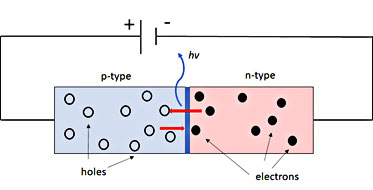 The band gap of the LED can be determined by measuring the minimum voltage across a working LED.  This directly determines the wavelength of the light emitted by the following relationship with h as Planch’s constant (eV*s) and c the speed of light in a vacuum.

The energy lost from the electron drop is conserved so a 2.75 V voltage corresponds to a 2.75 eV band gap and 450 nm light is emitted.  As the physics define, LEDs are monochromatic with the light emitted from an LED directly correlated to the band gap of the material which is in turn fundamentally driven by the materials of which the LED is constructed.  So conceivably, any wavelength LED should be possible.  Sort of…As every synthetic chemist knows, you have to be able to make the compound (drug, or catalyst, ligand, chromophore, or in this case semiconductor) that exhibits the property that you desire or predict.  Additionally, the device using the LED needs to operate efficiently.  And for decades, blue was a challenge.

Starting with their first commercial applications in the 1960’s, LED’s were used in low energy applications in the IR and near-IR for things like indicator lights, calculators and watches with low light output (mostly red).  The first LEDS were prepared from ZnS powders, SiC crystals, boron carbides, and later gallium arsenide (GaAs), gallium antimonide (GaSb), indium phosphide (InP) and silicon germanium (SiGe).  Surprisingly, however, most of the historical effort into the development of visible light LEDs was not focused on finding the ideal lamp for running cross-coupling reactions.    Instead, trivial matters like significantly lowered energy costs for lighting, creating crisp visual displays and high-speed data transfer were prioritized.   LEDs that mimicked white light were one of the primary goals of LED development.  To make a visual display you need a red, blue and green light source and for a white LED, either all three or blue with the proper phosphor coating.  Materials such as aluminum gallium arsenide (AlGaAs) and aluminum gallium indium phosphide (AlGaInP) made efficient red and yellow LEDs.  Green and blue LED’s were much more difficult ultimately resulting in a Nobel Prize in Physics in 2014 to three scientists (Shuji Nakamura, Hiroshi Amano and Isamu Akasaki) for their 1993 discovery of a high-powered blue LED.

Starting in the 1970’s gallium nitride was proposed and used to make low energy blue LED’s.  First in theory and then in practice, the first blue LED was made in 1972 based on magnesium doped gallium nitride but ultimately the device was not very bright.  (the history of the earlier project is described here)  Several decades of development into the synthesis and manufacturing of gallium nitride complexes (specifically p-type gallium nitride) and layering the materials on proper substrates ultimately resulted in high purity indium gallium nitride as a solution to an efficient blue LED.  One of the Nobel winners, Shuji Nakamura discusses the developments here.  From blue, white LEDs are made from gallium nitride blue diodes by coating with a phosphor compound to emit white light were possible.

Ultimately, getting the light out of the LED material after you have mastered the band gap, is part of the problem/solution to high efficiency LED’s circuit (not to be confused with focusing the light from a series LED chips as a “bulb”).  The refractive index of the semiconductors used in preparing the LED may mean that only 20% of the light may escape (Figure 4).  Most lens currently are irregularly shaped in order to maximize light emission.   Advances in layering and manufacturing of the semiconductors, materials for the chips, optical coatings, LED geometries and circuit design that all drove the efficiency of LEDs to the state that they are today (and ultimately this is where this story stopped being all that interesting to the chemistry side of our brains which just likes fun colors). 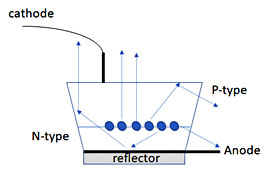 But back to our original question about the metals that we use in our LEDs (Figure 5).  Ultimately the band gap of the material defines the wavelength of light emitted, with the percentage of dopants added adjusting the band gap and resulting in different wavelengths.  Most of the LEDs that we use in our LED series are different architectures of doped InxGa1-xN compounds which can achieve band gaps ranging from 0.69 eV (IR) to 3.4 eV (365 nm).   For the 365 nm LED, the composition is ~0.02 In/0.98 Ga for 365 nm up to ~0.3In/0.7Ga and higher for the blue/green 450 and 530 nm.  The 650 nm and 740 nm LED chips are based on AlGaInP compounds and the white LED 6200K is a InGaN chip and a Ce:YAG phosphor to give a white spectra (the blue band and the broad band at 530 nm shown in Figure 5 below).  For all of the LEDs, the semiconductor materials are doped on layers of SiC or sapphire (Al2O3), Au leads are attached to the LED chip and the reflective layer is often made of a Ag mirror.   And if we dug a little deeper into the other components, we’re sure we could find some more interesting chemistry going on in the depths of the tiny LEDs that have changed the world. 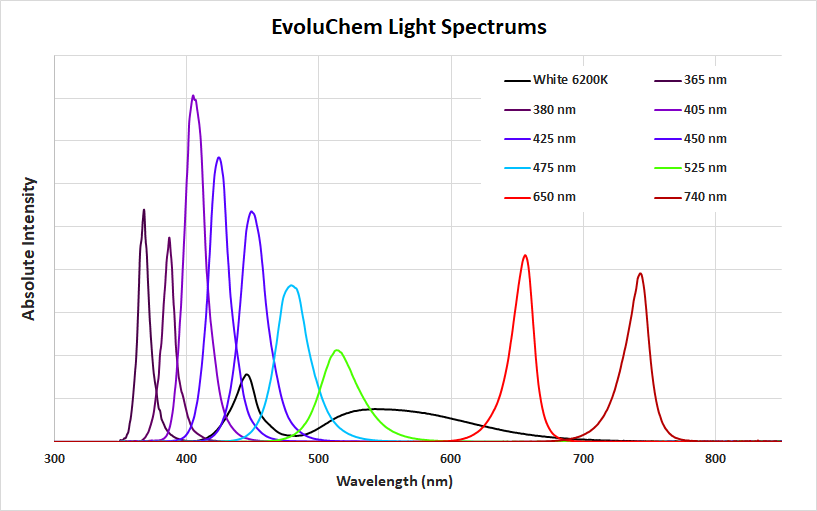 Modern LEDs are advantageous over both incandescent lights and CFLs based on both light output, energy use and waste concerns.  Modern high-powered LEDs convert more than 50% of the electricity they use for creating the light source. A 10 W LED generates 700+ lumen of light which is comparable to a 12 W CFL or a 60 W incandescent bulb.  Now, we joked earlier that most of the historical development of LEDs was not focused on running the perfect cross-coupling reaction but LED advances certainly have driven synthetic chemistry advances.  The commercial availability of LEDs as monochromatic, focused light sources with higher output than a standard light bulb, cheaper than an expensive UV light setup came at a time when the full potential of visible-light photocatalysts was about to be realized.   The wide range of wavelengths available meant that for the first time, it was very easy for a chemist in a lab to quickly set up and experiment with a cheap LED and ask the following questions, “Does my reaction work better with purple, blue, green, red or white light?”

Hepatochem offers a variety of photochemistry reactors and accessories that are used throughout the world to explore chemical conditions. All of our reactors are compatible with most vial formats and stirring plates. We also offer several photochemistry screening kits for calibration and accuracy.

Interested in learning more about our products?
Complete our short contact form and we'll get back to you as soon as possible. 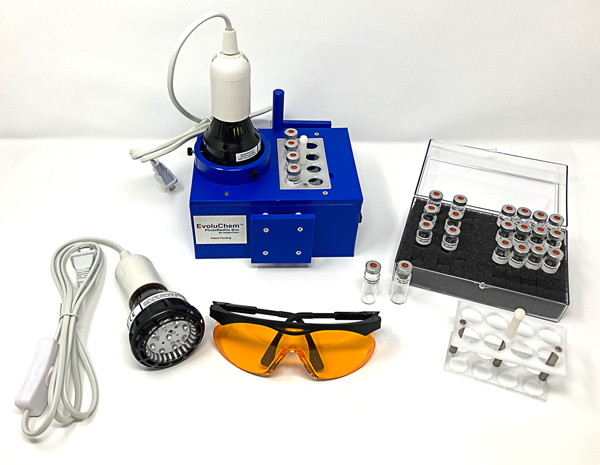 Through our revolutionary technology, HepatoChem enables cost effective testable quantities of metabolites in-house even at the earliest stages of drug discovery. This new capability, which enables affordable early metabolite toxicity testing, offers drug companies the opportunity to save millions each year through dramatically improved drug pipelines.